Thatcher: Legacy and Legend; divisive in life and death.

First, allow me to assert that I make no intention on “bashing” the death of Thatcher. I merely wish to analyse, from my personal opinion, her role as a minister and a formidable leader.

Indeed, she was a formidable leader. She redefined the political spectrum, and consequently the United Kingdom. She transformed us from an industrial power to a financial power house. Dubbed as a modernisation, the rate at which she transformed Britain was such that it aggravated a winter of discontent and the epoch of misery for many working class families and communities. Her role within the Conservative party was seen as an attack on the livelihood of a huge number of individuals across the north of England. She attacked the little that remained for the working classes and whoever makes an attempt on a man’s life, on a man’s liberty, on a man’s honour, inspires in us a feeling of horror analogous in every way to that which the believer experiences when his idol is profaned.

I would argue that Thatcher’s legacy denounced Unionism and Communitarianism, forcing Britain into crass commercialisation which reduced society to nothing more than a vast apparatus of “purchase” and “exchange” on credit and debt, disguised as liberty and individualism. She made it exceedingly clear that within her society communal life is, in fact, impossible without the role and existence of interests superior to those of the individual.

Commendations can be made upon her determination, conviction, and the role and importance for women who felt disillusioned or disenfranchised in 1980’s Britain, but as it has been made clear by Glenda Jackson this view may be somewhat distorted by an increasingly flattering press. Yes, she was a formidable leader due to the vast array of changes she made and the sheer extent of them; an excellent orator who is undoubtedly skilled in public addresses, but nonetheless an individual whose policies destroyed communities.

However, in regards to those who have celebrated her death without the knowledge of her true impact and rather relies on hearsay may be wildly misinformed. The controversies of yesterday only give superficial expression to a more profound disagreement, and an opinion which is far more divided over a question of principle rather than a question of fact. One must hear the arguments which have been exchanged on both sides in order to reach a justified and well-judged evaluation.

Thatcher’s nickname, the Iron Lady, has been totally misconstrued, according to newly released Cabinet documents. The newly released documents were forced to be released under the 30-year act, or something of a similar name (apparently Parliament have a imagination barrier). The documents show that after a total refurbishment of £2,000 to the Downing Street flat, Thatcher begged, argued even, to pay for a £19 ironing board, hence the name Iron Lady. It’s rather IRONic that she was willing to pay such a small expense; the documents released show that she had the carpets seamed, a chair cleaned, the crockery replaced and other things. It seems like they didn’t actually refurbish the flat at all, what they really did was clean a few bits and bobs and kept it secret for 30 years because, after all, there’s nothing you can do about it now.

I just wanted to make it perfectly clear that her name is IRONic. She came and tried to straighten out the creases of the British society and ended up doing nothing but putting a good old stain that can’t be removed. Well done, Thatcher! Good on you! 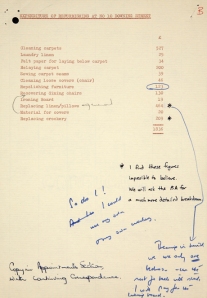